Ark Lighting Ltd > Resource Centre > Knowledgebase > Comparison of LED v Other light sources including HID
A warehouse facility recently upgraded its lighting. Before the lighting improvement project it was illuminated by low CRI HPS lamps which were replaced with higher CRI lights. The luminous intensity before the retrofit was 376lux (35 foot candles) which fell to only 269lux (25 foot candles) after the re-fit project! A reduction of 28% in light intensity yet most users of the facility rated the new lights as being significantly brighter than the older lamps.

The answers stem from the term ‘Pupil Lumens’.

Before delving further it will help to clarify a few concepts:

The diagram below demonstrates each one of these terms. 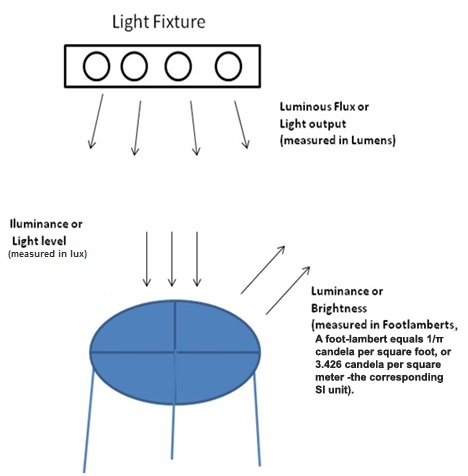 All the light output of an LED light is directed downward resulting in better Luminous Flux. This is only half the story. Compared to High Pressure Sodium (HPS) and Low Pressure Sodium (LPS) LED lights have a far higher Colour Rendering Index (CRI). A higher CRI is achieved because light produced by LED is not monochromatic but has a richer palette of wavelengths of light.

The traditional incandescent lamp has a CRI of 100, however CRI values between 75 – 100 are considered to be excellent for general purpose lighting, 65 – 75 is considered good while anything less than 55 is considered to be poor. When illuminated by a high CRI source surface colours of an object appear brighter thus resulting in a perception of higher Luminance.

From physics to biology – understanding the eyes’ response to Light

Cones and Photopic vision – The central part of the eye is the fovea that is rich in a type of cells called ‘cones’. Cones are responsible for colour vision and are involved in vision during bright light. This is called Photopic vision.
Rods and Scotopic vision – Rods are sensitive to dim light and are active during low light intensity conditions. Rods cannot perceive colour. Vision due to rods is ‘black and white.’
Light measuring instruments measure Light intensity in Lumens – considering only the response of the cones. Thus, the Lumens measured by a light meter are also called Photopic Lumens. In conditions of low light intensity entire vision is due to rod cells (scotopic vision). In medium light intensity (conditions as are often found under street lights and in homes) vision is called Mesopic vision and is due to both rods and cones. Using ‘Photopic Lumens’ to describe light intensity in such an area grossly underestimates the light intensity as it totally ignores the contribution of rod cells to vision.
Scientists at the Lawrence Berkley Laboratory (LBL) developed the concept of scotopic lumens. They developed a factor called S/P ratio. This ratio helps convert traditional Lumens into actual lumens perceived by the eye under mesopic light conditions and gives a more accurate estimate of the amount of light.
Pupil Lumens = Photopic Lumens * [S/P] 0.62 (example for SON)
Here are some types of lights with their traditional and pupil lumens:
Factoring in the S/P ratios reveals why Low Pressure Sodium lamps that are apparently the most efficient with a photopic lumen output of 130 Lumens/ Watt appear so dull. They just don’t have the spectrum of light needed to illuminate objects properly and elicit the optimum response from the human retina in mesopic lighting conditions.
This improvement in lumen perception is the reason why people and cities are opting for full spectrum lights. The current codes do not reflect scotopic lumens. Therefore, if you are planning to opt for LED lights as replacements for existing lights of a generation earlier it is prudent to avoid going by the published lumen output alone. The photopic lumen output of a light may only partially reflect the reality of the situation. Comparing absolute Photopic Lumens was alright as long as the same type of bulb was being compared. With differences in lighting technology there is a marked shift in wavelength composition and CRI. It is always better to try out energy efficient LED lights and experience their light quality first hand.
There is another factor underlying the improved perception of light from high CRI LED lamps. Below is a diagram showing the relative luminous efficiency of different wavelengths of light. Thus, cones have maximum efficiency at about 550 nm (green light)while the efficiency of rods is at its peak at around 510 nm (blue-green light). HPS and LPS lamps that are poor in the green yellow and blue yellow wavelengths naturally have a lower impact on the eye’s photoreceptors. While the current method of measuring Lumens takes care of the 550 nm peak it does little to tackle issues with the lower band of 510 nm. 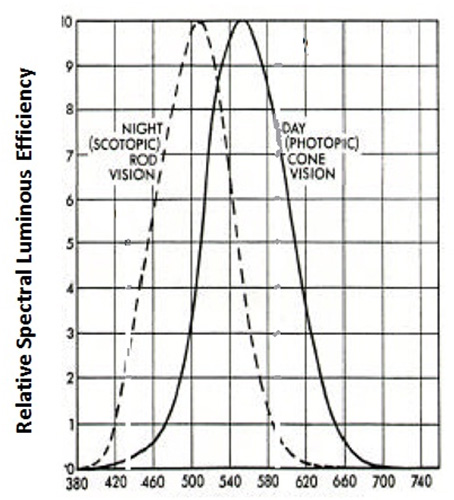 The Scotopic response is dependent on the blue light content of a light. Thus 6500 K fluorescent lights have better S/ P ratios than 3500 K tube lights. A look at the spectrum of light from different
light sources can help clarify a lot of things.
For this part of the analysis we decided to use cloud sourcing to improve the quality and reliability of the data. The images used to explain the information are not ours. All images are from open source resources (shared under the creative commons/ GNU free documentation license) available at www.flicker.com and www.commons.wikimedia.org.
You always suspected that light from the HPS lamp was dull – you were right. While the absolute lumens/watt produced by an HPS lamp is high it is the wavelength of the light that it produces that makes it appear dull.
Here is the spectrum of the HPS lamp. 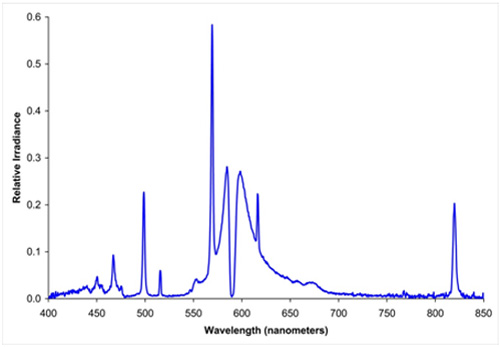 We have already seen that the eye is most sensitive to wavelengths of 510 nm and 550 nm. These very wavelenghts are scarce in the spectrum of an HPS lamp. The most prominent wavelengths in the spectrum of an HPS lamp are between 575 and 650 nm. The sensitivity of the eye to these wavelengths is 20 – 80% of the peak response. This is the reason why HPS lamps do not elicit the optimum response from the human eye and far fewer lumens from a good LED source can provide the same perception of brightness.
Another way of understanding the limitations of the HPS lamp is to look at its light color spectrum. Here is a visual representation of the wavelengths of an HPS lamp. This spectrum was obtained by using a home made spectroscope.
The large gaps in the spectrum are obvious. The heaviest density is in the red yellow region that is not very effective in stimulating the eyes. Moreover, because the spectrum is patchy HPS lamps are not good at colour rendering. 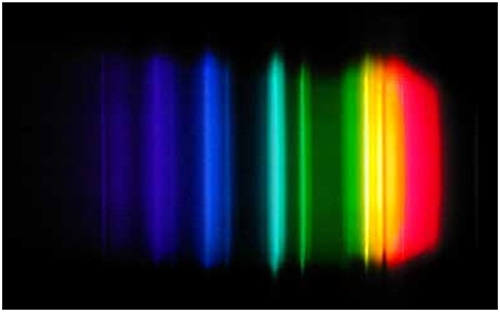 Here is the spectrum of a LED. 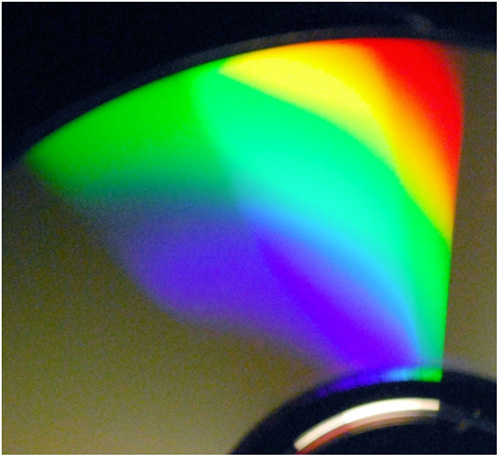 This image was also obtained by using a spectroscope. The spectroscope had a design different from the one used to obtain the spectrum of the HPS lmap yet the results are unambiguous. The spectrum is complete with no gaps. The wavelengths of 510 and 550 nm that are the most effective in stimulating the eyes are well represented in the spectrum. The result is better colour rendering and more effective stimulation of the eye.
More research is continuing in this direction and it is hoped that future lighting standards will reflect the biological response to light in a more meaningful manner than they currently do.
To summarise:
Warehouses, retail stores, street lights, and commercial spaces can easily benefit from the higher S/P ratio of LED’s.